The 30 Most Common Injuries for Adults Over 50 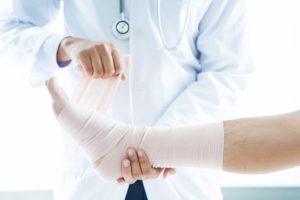 The 30 Most Common Injuries for Adults Over 50

The body is strong, but even it can’t completely withstand the test.   As you age, things help you function—from the muscles to bones that give you structure—start to slowly deteriorate, and these natural changes can lead to some pretty serious injuries.

From sometimes-fatal hip fractures to harrowing hamstring strains, here are the most common injuries in adults over 50. And if you’re looking to banish the perhaps most-common ailment among all ages.

Often doctors will discover that older patients complaining of knee pain have meniscus tears, or torn cartilage in their knees. These tears are similar to those seen in athletes, but rather than being caused by trauma on the field, they are simply the result of “aged, worn tissue” that is “more prone to tears,” according to the American Academy of Orthopaedic Surgeons.

According to the Centers for Disease Control and Prevention (CDC), at least 300,000 individuals ages 65 and over are hospitalized for hip fractures yearly, most of which are caused by falls.

According to the Mayo Clinic, rib fractures are amongst the most common bone breaks in older adults, caused by both traumatic events like falls and non-traumatic events like coughing or golfing. And not only are these injuries commonplace in the elderly community, but one study published in the Journal of Trauma and Acute Care Surgery determined that people aged 65 and older are twice as likely as their younger counterparts to die from a rib fracture.

Partially due to the prevalence of osteoporosis in older individuals, pelvis fractures are commonly seen in patients over the age of 50. This injury is so standard, in fact, that Finnish researchers have predicted that the number of osteoporotic pelvic fractures in the elderly population will triple by the year 2030.

“Older patients are much more likely to experience injury to the rotator cuff—the group of tendons, ligaments, and other structures that help give the shoulder its range of motion,” say orthopedic surgeon Anand Murthi, MD.

Thanks to thinning knee cartilage and weakening bones, older adults often suffer patellar, or kneecap, fractures upon falling or suffering some other trauma. If the pieces of broken bone are still where they’re supposed to be, the fracture will heal with the minor assistance of a splint or cast—but if the bones have displaced, a patellar fracture will require surgery in order to properly heal.

More commonly known as frozen shoulder, this injury causes stiffness and pain in the shoulder joint and is often occurs in people who have been unable to move their arm for a long period of time. According to the Mayo Clinic, this condition is most commonly seen in people over the age of 40, especially in women.