At the age of 95, Betty White reveals her secret to staying young

At the age of 95, Betty White reveals her secret to staying young 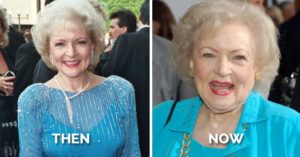 Betty White turned 95 on January 17th, 2017. But she is showing absolutely no signs of slowing down, which should encourage those of us who still seem to have time on our side.

How Does Betty White Stay So Youthful?

With a more than a seventy-five-year career that spans acting, writing, comedy, radio, television, and activism, she has handled it with grace. Still, though, it’s a mystery how she has pulled it off.

In a TODAY interview with Al Roker, Betty mentioned one hobby of hers that may shed some light on the question about youthfulness. It’s – drum roll, please – the opposite sex. There’s only one problem: “Who’s gonna want to ask out a ninety-four-year-old woman?” she says. “It just doesn’t happen.”[1]

It seems like her life outside of acting is not so different from her two most iconic, near legendary roles. Between her role on The Mary Tyler Moore Show as the man-hungry Sue Ann Nives and the naïve Rose Nylund on Golden Girls, however, Betty relates more to the former. Both Sue Ann and Betty like men; it’s a hobby they share and one, she jokes, that the men don’t know about.[2]

However, jokes and laughter aside, Betty never remarried after her late husband Allen Ludden died in nineteen-eighty-one, asking, “When you’ve had the best, who needs the rest?”[3]

Get yourself a hobby! Doing it now will greatly benefit you as you grow into your golden years. Besides men, Betty’s fountain of youth is “[her] work with animals. Everybody should have or cultivate a passion. Don’t be afraid to get really hooked on something, because that will refurbish your energy.”[4]

In addition to energy, hobbies (and leisure activities) can: Enhance your immune system

Betty also believes that for any relationship to be successful, personally or professionally, kindness is key. “I think that you don’t say the hurtful thing even if you’re irritated or upset, because that sticks around, or that just chips off a little of the other guy’s self-esteem.”[7]