The latest word on two of the most popular dietary supplements is a weighty one: Brigham and Women’s Hospital researchers over the weekend released results of the largest randomized clinical trial to evaluate the effects of both vitamin D and omega-3 fatty acid supplements on heart attack, stroke and cancer risk, finding that omega-3 fatty acids or fish oil cut heart attack risk.

The study, presented at the American Heart Association’s annual conference and published simultaneously in the New England Journal of Medicine, was conducted as a rigorous placebo-controlled trial over more than five years, and reveals what researchers are calling a “treasure trove” of information on the effects of both supplements, though not all of it was positive.

Specifically, the study’s results showed that taking omega-3 fatty acids aka. fish oils reduced heart attack risk — but did not affect risk of stroke or cancer.

Vitamin D supplements, on the other hand, did not affect heart attack, stroke or cancer incidence, according to the study. But there was one promising secondary finding: that vitamin D was associated with a decrease in cancer deaths that kicked in at least two years after participants began taking it. That is, taking something like the study’s 2,000 IU dose of vitamin D won’t stop you from getting cancer, but appears to possibly reduce your risk of dying from it by about 25 percent. 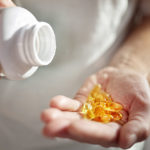 For one group, results were even more pronounced: African American participants who took fish oils saw a 77 percent reduction in heart attack risk — an upshot that the study’s author, JoAnn Manson, chief of the Division of Preventive Medicine at Brigham and Women’s Hospital, called “dramatic” for a population that has not been well studied in previous trials of such supplements. “If this finding is confirmed and replicated, it may point to a very promising approach to reducing coronary risk among African Americans,” Manson said in a statement.

Overall, the study included 25,871 men and women age 50 and older from across the U.S., including 5,106 African Americans, who had no history of cancer, heart attack, stroke or other forms of cardiovascular disease when they enrolled. That detail made the research the first to look at how these supplements might prevent the first occurrence of heart disease in a general population. (Earlier trials had examined whether fish oil or other supplements might prevent heart attack or stroke in patients with either a history of heart disease or a very high risk of it.)