This Is How Much Exercise You Need To Offset Seasonal Depression

This Is How Much Exercise You Need To Offset Seasonal Depression 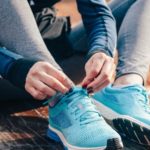 Many people find themselves struggling with lulls in energy and mood as the weather gets gloomier and the days get shorter, known as seasonal affective disorder . SAD is a type of depression that occurs annually, starting around the autumn, worsening in the winter, and typically ending in the spring. Approximately half a million people in the U.S. suffer from SAD, and three-quarters of those sufferers are women. There may actually be a way to help prevent these depressive dips before they strike: staying physically active.

A new study found that maintaining an active lifestyle can protect an individual from depressive episodes, which is especially relevant during this time of year. The paper, published in the journal Depression and Anxiety, found people who engaged in at least four hours of exercise per week were significantly less likely to be diagnosed with future depressive episodes, even in the face of high genetic risk for the disorder.

The researchers used data on nearly 8,000 participants who filled out a survey pertaining to their general lifestyle habits, including physical activity.

Both high-intensity and lower-intensity forms of exercise were linked to decreased odds of depression—so everything from fast-paced aerobic exercise to gentler stretching sessions.

Exercise obviously won’t cure depression, and it can be hard to find motivation once you’re already in depression’s slump. But these findings do demonstrate the beneficial effects of moving the body to neutralize the risk of future episodes in individuals who are genetically vulnerable, according to Choi. With each added four hours of physical activity per week, the study’s participants were 17% less likely to have a future depressive episode.

These findings are optimistic for SAD sufferers whose disease is cyclical, as well as individuals who suffer from different types of depression that exist year-round or in episodes. While exercise, again, is not a cure for the complex symptoms of depression, this study, along with many others, proves that movement can indeed limit the effects of the disease.