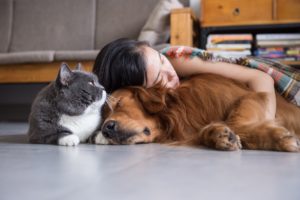 Owning a pet is no easy feat, but that hasn’t stopped Americans from adopting dogs and cats at staggering rates. In fact, a cool third of American families own pets.

From soothing muscle aches to slashing stress to even increasing your longevity, owning pet offers some serious health benefits.  But a pet in the house is more than just a fun new family member: it’s a bona fide mini medicine cabinet.   Here they are.

1 They help your heart.

Not only do adorable pets melt hearts with their sweet faces, but they apparently also keep your ticker in tip-top shape. That’s according to one study published in the journal Circulation, which found that owning a pet is correlated with both a reduced heart disease risk and increased survival among heart disease patients.

2 They keep you happy.

Any pet owner can attest to the fact that nothing is quite as comforting than cuddling up with a furry friend. In fact, one study conducted at Ohio State University found that for college students, simply owning a cat or dog was enough to help reduce their risk of becoming depressed or feeling lonely.

3 And prevent you from putting on pounds.

In the same Ohio State study, nearly 25 percent of participants reported that owning a dog or cat helped keep them active, primarily because their pets forced them to go outside for walks. And this is good news for owners’ waistlines, seeing as researchers from Duke University found that walking for just 30 minutes a day—whether it’s with or without your dog—can help prevent weight gain.

Is a big test or a daunting work presentation severely upping your cortisol levels? Some downtime with your dog could help calm you down. In fact, according to one study out of SUNY Buffalo, just being around your pet is enough to reduce stress levels—even more than if you were to seek comfort from a loved one.

5 They protect children against allergies.

If you want to protect your child from developing allergies, then just get them a furry brother or sister. Research published in the journal Microbiome found that children who lived in homes with pets presents had higher levels of microbes associated with a reduced risk of allergic disease. The study authors believe that because pets expose children to bacteria and dirt at an early age, toddlers with a cat or dog are better able to develop immunity.

6 They help with PTSD.

When researchers at the Purdue University College of Veterinary Medicine analyzed veterans with post-traumatic stress disorder (PTSD), they found that “the group of veterans with service dogs had significantly lower levels of PTSD symptomology than those who did not have a service dog,” according to a press release.

According to the American Heart Association, owning a pet is one of the many ways you can lower your cholesterol levels (and it certainly beats cutting red meat out of your diet).

Even though they can’t actually say anything, dogs and cats have the incredible capability to lift their owners up as no human can. In fact, one study published in the Journal of Personality and Social Psychology concluded that generally, pet owners benefit from greater self-esteem and mental wellbeing.

An apple a day might keep the doctor away—but if you’re not a fan of the fruit, you could always just get a dog or cat instead. According to one study published in Social Indicators Research, simply owning a pet can reduce your number of doctor’s visits by about 15 percent annually.

11 And they take fewer medications.

If you want to save money on medications, just become the proud of owner of a canine or feline. According to another study published in the journal Social Indicators Research, pet owners were less likely than their pet-free counterparts to be on medications for things like heart problems and sleeping troubles. Getting a pet and living healthier: It’s a win-win.

12 They stave off diabetes.

Struggling to get off the couch and take your dog for a leisurely stroll? This information might motivate you: According to the Mayo Clinic, going for a walk every day helps to prevent and/or manage various health conditions, including type 2 diabetes.