“Amalgam is a valuable, viable, and safe choice for dental patients,” according to a report from the ADA’s Council on Scientific Affairs. 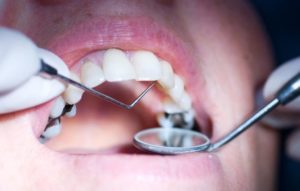 Other national health organizations, including the FDA, support this stance.

While the FDA acknowledges that mercury “vapor” may leak from amalgam fillings—leading to elevated levels of mercury in the body—it says there’s not good evidence that this mercury leads to negative health outcomes.

Even for nursing mothers, the FDA states, “Infants are not at risk for adverse health effects from the mercury in breast milk of women exposed to mercury vapor from dental amalgam.”

What an Expert Says About Mercury

“Looking at the existing body of evidence, studies don’t support the belief that there would be negative health effects,” says Stefanie Russell, DDS, PhD, a clinical associate professor of epidemiology and health promotion at New York University. “People should not be worried.”

Earlier this year, Russell authored a report in the Journal of Evidence-Based Dental Practice. In her report, she examined a recent study of pregnant women and blood mercury. While that study linked having four or more amalgam fillings with elevated mercury levels, it did not find any associated health risks among the women or their kids.

“People have been using amalgam fillings for a very long time,” she says. (More than 150 years, actually.) “There’s no compelling evidence that they cause disease.”

It’s important to point out that Russell, the FDA, and the ADA aren’t claiming that amalgam fillings cannot raise your body or blood’s mercury levels. Instead, they’re saying there’s no evidence that the uptick in blood mercury from amalgam fillings is dangerous to your health.

“Of course, mercury can cause disease,” Russell says. “But people are exposed to small amounts of mercury all the time.” (Seafood like tilefish and swordfish contain heavy amounts of mercury, and the EPA recommends pregnant or nursing women and children avoid them. Many other types of fish and shellfish, most notably tuna, also contain mercury, and should be eaten in moderation—no more than 12 ounces per week—per the EPA.)

When it comes to fillings, Dr. Russell says, the evidence doesn’t warrant freaking out.

Still, Some Research Is Concerning

Not all health authorities believe the mercury in amalgam fillings is harmless.

Norway has banned the use of amalgam fillings—as well as many other mercury-containing products. But their justification for the ban was that mercury is finding its way into waterways and fish, and so its continued use constitutes an environmental health concern—not a direct threat to humans.

But here in the US, even many holistic dentists who advocate for non-mercury “composite” fillings don’t highlight health concerns as the reason for their anti-amalgam stance. Most point to cracked teeth caused by the expansion or contraction of amalgam fillings as a reason to avoid them.

What Should You Do?

Despite a few scary studies, large-scale reviews of all the existing research have not found strong evidence of amalgam-filling-related mercury dangers.

A 2016 review from the University of Ottawa in Canada found that, while mercury levels are elevated in people with amalgam fillings, “there was no statistically significant link made to adverse health outcomes.”

That doesn’t mean amalgam fillings are guaranteed safe. It just means that, if you have them, there’s no compelling reason to have them removed.

Whether it’s a nursing mother or an older adult with a mouth-full of metal fillings, Dr. Russell says, “There is no situation”—short of a broken or defective filling—“in which I’d tell a patient to have amalgam fillings removed.”

In fact, mercury is most likely to escape from an amalgam filling during implantation and removal, she says. So if you’re worried about mercury, having your metal fillings replaced doesn’t make much sense.

But if you’re in need of a fresh filling, or one of your existing amalgam fillings is damaged? Different story.

“Tooth-colored composite fillings are better than ever,” Dr. Russell says. “It used to be that they weren’t as strong or long-lasting as amalgam, but they’ve improved a lot over the last 10 to 15 years.” (They also aren’t as conspicuous as amalgam fillings.)

If you need a new filling, play it safe and go with composite.