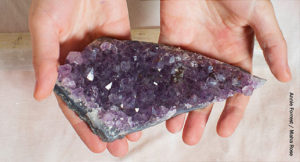 Jan. 16, 2018 — When Sadie Kadlec approached her boss at a high-end fashion firm in New York City to ask for a raise a few years ago, she secretly clutched two small pebbles in her right hand. One was an orange crystal called carnelian, said to promote courage; the other, a pale bluish-green gem stone called kyanite, said to correspond to the throat, or voice, “chakra” (one of seven spiritual energy centers in the body described in some of the healing traditions of ancient India, including yoga).

Initially, her boss resisted her request. But Kadlec, fueled by a calm confidence that seemed to come out of nowhere, bargained hard and got what she asked for.

“I was blown away by what those two stones did for me,” says Kadlec, 30, who now meditates on crystals daily, carries them with her, and teaches classes on how to use them to promote emotional and physical health. “These are pieces of the Earth with their own gravitational force or energy, and you can feel it.”

A decade ago, Kadlec’s story might have been written off as New Age psychobabble, but today — in what some are calling the “new New Age” — such alternative healing therapies are everywhere.

Google searches for “crystal healing” have more than doubled in the past 5 years, fueled by endorsements from celebrities like Katy Perry, Kate Hudson, and Adele, who clutches one during performances to fend off stage fright. Himalayan salt lamps marketed as mood boosters and magnetic bracelets billed as pain relievers are easily found on Amazon and at Walmart. A Himalayan pink salt lamp was one of Amazon’s best-selling home improvement products over the holiday season among the company’s Prime subscribers.

And alternative healing centers from San Francisco to New York City are bursting with well-educated millennials from the real estate, finance, and tech industries. They pay big bucks per hour for a session of crystal or “flower essence” therapy, which uses tinctures dropped under the tongue, or Reiki, an alternative therapy that uses no-touch massage to transmit healing energy through the hands.

“We get a lot of people who come to New York to work, realize they need some tools to stay healthy because life is really intense, and say traditional medicine is not meeting their needs,” says Lisa Levine, a licensed acupuncturist and the founder of the popular Maha Rose Center for Healing in Brooklyn. A one-hour Reiki session there will run $100 to $175, and a palm-sized labradorite crystal will run you $30.

Could these treatments really work?

Actually, yes, say neuroscientists and psychologists. But not necessarily for the reasons people are told they do.

But there is the possibility that they might have an indirect psychological benefit.

Stuart Vyse, author of “Believing in Magic: The Psychology of Superstition”

The placebo effect is almost certainly at play. And the mere act of doing something to take control of your destiny can often boost hope, brighten mood, and improve your ability to cope with a chronic condition, says psychologist Stuart Vyse, author of “Believing in Magic: The Psychology of Superstition.”

“There is no scientific evidence to support the medical effectiveness of any of these remedies,” he says. “But there is the possibility that they might have an indirect psychological benefit.”

What the Science Says

In all, U.S. consumers spend about $30 billion a year on complementary and alternative medicine. Some — like meditation and yoga — are backed by scientific evidence.

But for many others, there’s little supporting research.

One of the only studies ever to explore crystal healing was done in 2001 by University of London psychologist Christopher French. He gave 80 volunteers booklets explaining the sensations they might have while holding crystals, including tingling limbs, increased concentration, and heightened energy. Then he gave half of the participants genuine gemstones and the other half fakes made of cheap plastic. Those holding a fake were just as likely to respond physically as those holding the real thing. French’s conclusion: The power of suggestion — not flowing energy — was to credit.

A study done in 2013 examined magnetic bracelets, often used as remedies for pain. Researchers assigned 70 people with rheumatoid arthritis to consecutively wear one of four different devices (two kinds of magnetic wrist straps, a copper bracelet, and an ordinary bracelet) for 5 weeks each. They found no difference between the bracelets in easing pain or inflammation.

While Himalayan salt lamp sellers say their lamps give off negative ions that can boost feel-good brain chemicals, they can cite no quality studies.

“Is there something about Himalayan salt that releases positive ions in the air and has a therapeutic effect on the human body at a distance? From everything I have read, I would have to say ‘No,’ ” says James Giordano, PhD, a professor in the departments of neurology and biochemistry at Georgetown University.