What to look for when buying apple cider vinegar

How to Shop for Apple Cider Vinegar

Wellness insiders gush about their $4 bottle of apple cider vinegar just as much as they do their adaptogenic powders with sexy names and $25 vegan coconut yogurt. Wellness enthusiasts love it. Throwing back ACV daily has been linked to boosting good digestion, regulating blood pressure, and even helping with joint pain—to name just a few of its benefits.

But when it comes to buying one, there are a few things to know. There are different types of ACVs, as it turns out. For advice on buying one brimming with benefits, I asked two experts—Danielle Omar, RD, and Vinegar Revival author Harry Rosenblum—for their advice. 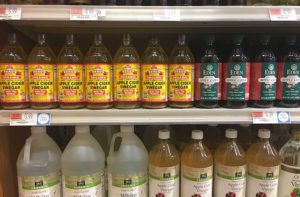 Right away, Omar calls out two terms to look for on the label: unfiltered and unpasteurized. As a result, she says, it has the ‘mother,’ which consists of healthy bacteria. Similar to kombucha, the mother can look a little, well, gross—like floating cobwebs. “Some people see it and they think it means the apple cider vinegar has gone bad, but that’s actually the part loaded with gut benefits,” our expert says. She explains that “unfiltered” means this good bacteria wasn’t taken out and “unpasteurized” means it wasn’t treated with heat, which can kill the aforementioned good bacteria.

What to stay away from

Rosenblum adds that you should stay away from anything labeled “apple-flavored”. “This means the brand probably used apple juice and not real apples,” he says. “Some companies will commercially distill vinegar and then add color and flavoring to it”. For the record: It won’t have the same benefits, so buyer beware.

The region where apples are typically grown is a good indicator of where vinegar is made, Rosenblum explains. ACVs made in the United States are the best, according to him. Imported varieties from Europe are decent, however. “I would be wary of apple cider vinegars coming from China, though,” he says. “There are much looser requirements there—it’s a little like the Wild West.”

He also recommends checking into artisanal, locally-made ones. (He’s especially into Sewall Orchard Organic, made in Maine.) But that doesn’t mean good-quality mass produced ACVs don’t exist. Rosenblum says Bragg’s—the most popular and widely available brand—is a good one, and another one of his favorites is Publix’s store-brand ACV.

Rosenblum says that most store-bought apple cider vinegars have an expiration date of five years—that’s a long time to be sitting on a shelf. “The bacteria is alive, so it needs oxygen to survive,” he says. “No oxygen is getting in when it’s all bottled up. A five-year-old ACV is fine to cook with, but it’s not going to have the same gut benefits as one that’s not as old.”

The best way to make sure your ACV is as probiotic-rich as possible is to make it yourself. “Then, you’ll know it’s full of probiotics,” he says. Staying stocked up on a good-quality ACV is one wellness habit that’s easy—and won’t break the bank. If only your gummy vitamin addiction was just as accommodating, right?