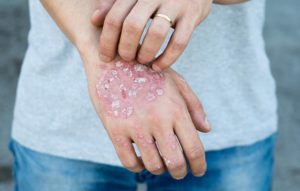 Sadly, the emotional toll of psoriasis is only one aspect of its challenges. Psoriasis patients are also at greater risk of additional autoimmune illnesses, including rheumatoid arthritis, another form of arthritis known as psoriatic arthritis, and inflammatory bowel disease. But on top of it all, the risk of yet another autoimmune condition, celiac disease, is especially severe. Research suggests that having psoriasis roughly doubles the odds of being diagnosed with celiac disease. (Another study found the converse to be true, too: Having celiac disease significantly raises the risk of developing psoriasis.)

On a happier note, one study found that 42% of psoriasis in patients with celiac disease could be attributed to the underlying celiac disease, suggesting that for psoriasis patients with a gluten sensitivity, adopting a gluten-free diet may improve psoriasis symptoms. This is yet another instance of the healing power of eating for your particular body and your particular health profile. Many foods have different effects on different people. Use this knowledge to heal, rather than harm. (Do you have an anti-inflammatory diet? Here’s why you should.)

Another way people with psoriasis may better control their symptoms is to lose any extra weight. That’s right—losing weight can improve your psoriasis and improve how you respond to medications. In one study, 60 obese patients with psoriasis were divided into either a weight loss group that ate 800 to 1,000 calories a day for 8 weeks, followed by 8 weeks of no more than 1,200 calories a day, or a control group. After 16 weeks, the weight loss group lost an average of nearly 34 pounds, compared to less than 1 pound in the control group. Those in the intervention group also experienced an average change of −2.3 points in their Psoriasis Area and Severity Index (PASI) scores, a standard assessment of psoriasis activity, as opposed to just −0.3 in the control group. Researchers also noted that the greatest reduction in psoriasis severity occurred in the first half of the study, when the greatest weight loss occurred.

Researchers later conducted a follow-up study of this same group to observe the long-term effects of weight reduction, following the participants for an additional 48 weeks. Of the 32 people who completed the full course, average weight loss compared to original weight was just over 22 pounds and PASI scores were 2.9 points lower compared to the baseline. According to these results, long-term weight loss appears to keep psoriasis severity down for the long term.