What are chiggers and what do they look like? The truth is, you might not see the chiggers — they measure just 1/150th of an inch, making them nearly invisible to the naked eye — but you’ll definitely see their itchy, skin-irritating results after you’ve spent some time outside.

What Is a Chigger?

Also known as harvest mites, berry bugs, red bugs and harvest lice, these tiny red bugs are mites (Trombiculidae). When people ask, “What are chiggers?,” they’re usually thinking of bugs when, in fact, these pests are related to spiders. (1) They can leave their mark on you after a stroll through the forest, a sunny game of golf or a playdate with your children in a park.

The good news is that you don’t have to suffer needlessly thanks to natural remedies that soothe chigger-related bites and keep the pesky bugs at bay.

What Are Chigger Bites?

When you get bitten by a chigger, it injects fluid into your skin.  This fluid they inject contains various enzymes that make the cells in your 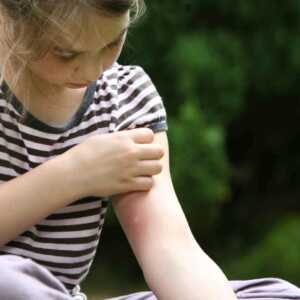 skin break and rupture. This helps the chiggers to essentially eat your skin cells, and it’s the resulting irritation from the digestive enzymes that lead to common chigger bite symptoms.

When the chiggers bite you, you won’t feel it. These insects are so small that the bite itself is relatively painless. However, as the enzymes they inject into you begin to spread through your skin, you’ll start to see skin irritation and specific symptoms including:

While oral or topical medications are often recommended to treat chigger bites, several natural home remedies or diy chigger bite treatments can quickly and effectively reduce the spread of the rash and keep skin discomfort at a minimum. What is the best cure for chigger bites?

If you suspect you may have been exposed to chiggers, or you simply want to do daily prevention maintenance, take a warm shower immediately after a potential exposure (i.e. walks in a park, hikes in the forest, gardening among tall grasses or shrubs, etc.).

This can quickly and effectively get rid of the unseen bugs, dramatically reduce the number of bites, prevent chigger bites from spreading, and is usually the first step for this chigger remedy.  Use soap or shower gel and an exfoliator or cloth and scrub your entire body.

Because chiggers like to crawl, scrub everywhere and not just where you might see a few initial bites.  Pay special attention to your ankles and legs.

Once you’re done scrubbing, rinse off with very cold water, which can help soothe your skin and reduce itching.

Calamine lotion is a natural topical medication made from zinc and is one of the best remedies for chigger bites. Historians have found evidence of its use for skin itching as far back as the Egyptian civilizations of 1500 B.C. (11)

It’s commonly used as an anti-itch treatment for chiggers as well as other forms of insect bites. (12) Apply little dabs of this pink liquid to affected skin areas once in the morning and again in the afternoon, or whenever itching returns.

Baking soda has natural skin-soothing properties. To control chigger bite itch, as well as itching from all sorts of insect bites, mix equal parts of baking soda and water to create a thick paste. Spread it onto the chigger rash and let it sit for 20 minutes before rinsing and patting dry. (13)

While your doctor may suggest commercial antihistamines, talk with him or her about the appropriateness of natural alternatives. This is likely the best chigger bite medicine.

Other natural enzymes and ingredients that may be just as effective at treating chigger bites as drug-based antihistamines include: (15)

Keeping your skin cool can help reduce skin irritation and itching, and also soothe away topical redness. Use a cold towel compress, or consider soaking green tea or black tea bags, placing them in your fridge for a few hours, and then applying them to your skin rash (the antioxidants in the tea can help nourish and heal your skin).

The next time you’re heading out for a picnic or getting down to play a yard game, check for chiggers so you can avoid that specific area of grass or park where chiggers live:  Lay a piece of dark cardboard on the ground. Within a few minutes, pink or yellow or little red bugs will show up on the cardboard if chiggers are present.

If you’re unsure if chiggers are present, or simply determined to enjoy the outdoors during warm weather regardless of them, you can take simple steps to reduce your risks of getting bitten:

Symptoms typically go away after a few days, but those few days can include intense itching and skin rashes.