“For years, I had been scheduling a “menstrual” massage for myself about two days before my period. This is when I’m feeling most tender and grouchy. It makes me feel so much better to do that and to have my special heat pack, tea, and aromatherapy that I use to self-soothe,” says Beider, who in addition to being a certified massage therapist has also worked as doula and aromatherapist. That was when she realized that the treatments she was doing for herself could also help other women feel better during that time of the month. 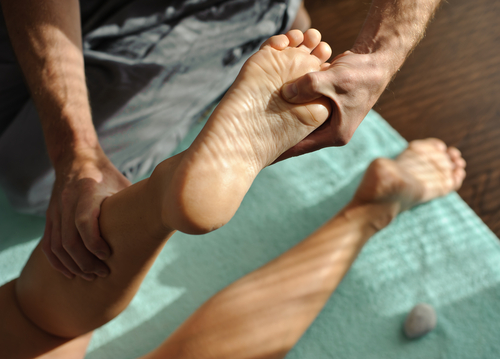 “When I first came up with it, I was shocked that no one else was offering it,” Beider says. “As women, we spend years of our lives menstruating. So many of us are affected by dysmenorrhea or period pain, and cramps, and yet, as a society it’s something we rarely talk about.”

During her years as a licensed massage therapist (LMT), she had seen many women asking for help with PMS symptoms—but they would usually wait until they were already on the massage table to bring it up, and many of them didn’t seem very comfortable talking about it. Putting a period massage on the menu would sidestep some of that awkwardness, Beider realized.

Plus, there is some research to back up Beider’s claims. One study from the University of Miami found that women who had massages before their periods had relief from “anxiety, depressed mood, and pain immediately.”

Putting The Period Massage To The Test

I typically get pretty severe PMS, emotionally, as well as bloating, cramps, nausea, lethargy, brain fog, and pain in my lower back. I told all of these things to my LMT, Amey. She took them into account and then tailored the experience specifically to what I had said. Amey gave me raspberry leaf tea (which  helps with cramps). She put a warm 10-pound weighted heat pack pillow filled with flaxseed and lavender on my lower back. She first focused on acupressure points on my limbs, neck, and upper back. It was instantly soothing and calming to have both the warmed heat pack relieving the tension and cramps in my lower body, while acupressure made me feel less bloated, foggy, and sad.

Amey also used rose geranium essential oil during my massage. I had never smelled it before and I immediately asked what it was. It was so light, pleasant, soothing, and almost citrusy. Apparently, it’s an essential oil that helps with hormone and mood regulation. I liked the refreshing and lightly floral/citrus smell of it so much. I ordered some as soon as I got home. Beider says you can even grow rose geraniums in window boxes to release the therapeutic benefits into your home. I found the smell so soothing that come spring, I just might try it.

By the time that Amey got to my lower back and abdomen, the entire area was relaxed from the weighted heat pack. It made the massage feel even more powerful at dispelling cramps and pain.

I left my massage feeling thoroughly blissed out and lighter. I could tell that I was less bloated and retaining less water, too. After my massage I went to a dinner and movie date and had a great time. This is something that would usually be off limits for me at the height of PMS. Smelling the rose geranium for the rest of the night was even comforting.

I felt so much better and lighter for the rest of my cycle. I’m going to follow Beider’s example and schedule a monthly massage two days before my period starts, when I’m at peak PMS.